The most important thing I did to find my purpose 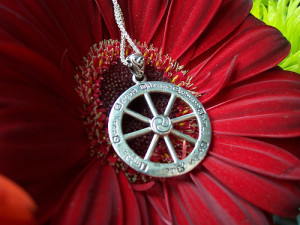 When I was in my early 30s my life was fairly aimless. I lived in a tiny RV trailer in the driveway of a big group house that was shared by 7 other people. I was stuck in an unhappy relationship that was going nowhere and I barely eked out a living cleaning houses and having a failing massage practice. Worse than all that, I had this lingering feeling that my life was supposed to amount to more than it was, and I didn’t mean wealth or accomplishment in the traditional sense. I really felt like I was here for a reason, but I just couldn’t figure out what it was. By luck or divine providence I stumbled upon a class on magic and decided to give it a try. The class was awesome and I learned a lot, but things didn’t really start changing for me until my second year of training. It was during this year that we all took a vow to follow the sacred holidays of the quarter and cross-quarter days and “walk the Wheel of the Year”. The class begun in ernest on Feb 2, Imbolc, or Candlemas as it it some times known. It was there that I took the vow to “Live my life as a magical act”. For the next year and a day I had committed to letting every second count as some kind of magic. It felt serious and important at the time, but of course I was completely unprepared for the journey I was about to take. By the end of the year, I had accepted my calling as a healer, was headed to grad school to get my degree in Chinese Medicine, and had fully accepted myself as a magical being What started as a simple vow, deepened as the year progressed. By Ostara, in March, I was ready to plant the seeds for a new life. By Beltain, May 1st, I had come to know some of my deepest heart’s desires. By Mid-Summer I received a vision so powerful I can still feel it today. It was then that I really began to realize my own capabilities as a magical person. August 2nd, Llamas,  brought the first rewards of the year in the form of acceptance to grad school, and by Samhain, in October, I was ready to say goodbye to much of my old life, I moved out of my trailer into the first house I ever owned, and started school to prepare for my career in medicine. By Winter Solstice in December I was ready to be still in the dark quiet of the year and comfortable for the first time with not knowing where exactly I was headed, but knowing it would be amazing. It wasn’t just the celebration of these ancient holidays that made the year so amazing, it was that I had vowed to walk through the year in a way that allowed the mystery teachings of each holiday to become present in my life. Each holiday has, buried within it’s rituals, a deeper set of lessons and wisdom to teach us.  When I made my commitment, I committed to being living vessel for those lessons and I was amazed at how life provided exactly the circumstances I needed in order to learn and grow. For instance, Beltain, the high holiday of May Day, is the time for honoring our deepest desires. It was then that I realized how all my life I had wanted to be a healer. On the Fall equinox we celebrate the harvest, and savor our rewards, but even in the harvest there is an element of letting go. That which is harvested does not grow anymore. It was during this time that I bought my house, and was about to begin grad school, which meant deciding what things from my old life were important to continue nurturing, and which things it was time to harvest and be done with. The wheel has turned many times since that first year that I made my vow, and each year it never ceases to amaze me how much there still is to learn from the simple wisdom of these powerful days. In the years since that first one, my magical practice has deepened and grown. I have earned my degree and started a rewarding practice as an acupuncturist. I have met my soul mate, and together we brought our son into the world. Some years I celebrate all holidays in a grand fashion, sparing no extravagance and celebrating in large groups. Others, like the year my son was born, I observed them quietly and simply. But I always feel the energy of the earth and the seasons no matter what I am doing externally. Returning each year to familiar rituals has taught me many lessons. First that change is a process, that all things have a perfect time and place. Also, that there is a pattern and web to life that is much greater than me, but of which I am an integral part. And perhaps most importantly, that change is the only constant. I am so excited to be offering a year-long immersion in this transformative practice starting this Imbolc (Feb 1st). If you would like to learn more about this class, join me for a free phone call on January 25th. In this call I will share more in depth on each holiday  and how you can use Wheel of the Year to make 2015 your most transformative year yet.  Enter your email below.
photo credit: alabaster crow photographic via photopin cc