Your Mutha is a Witch 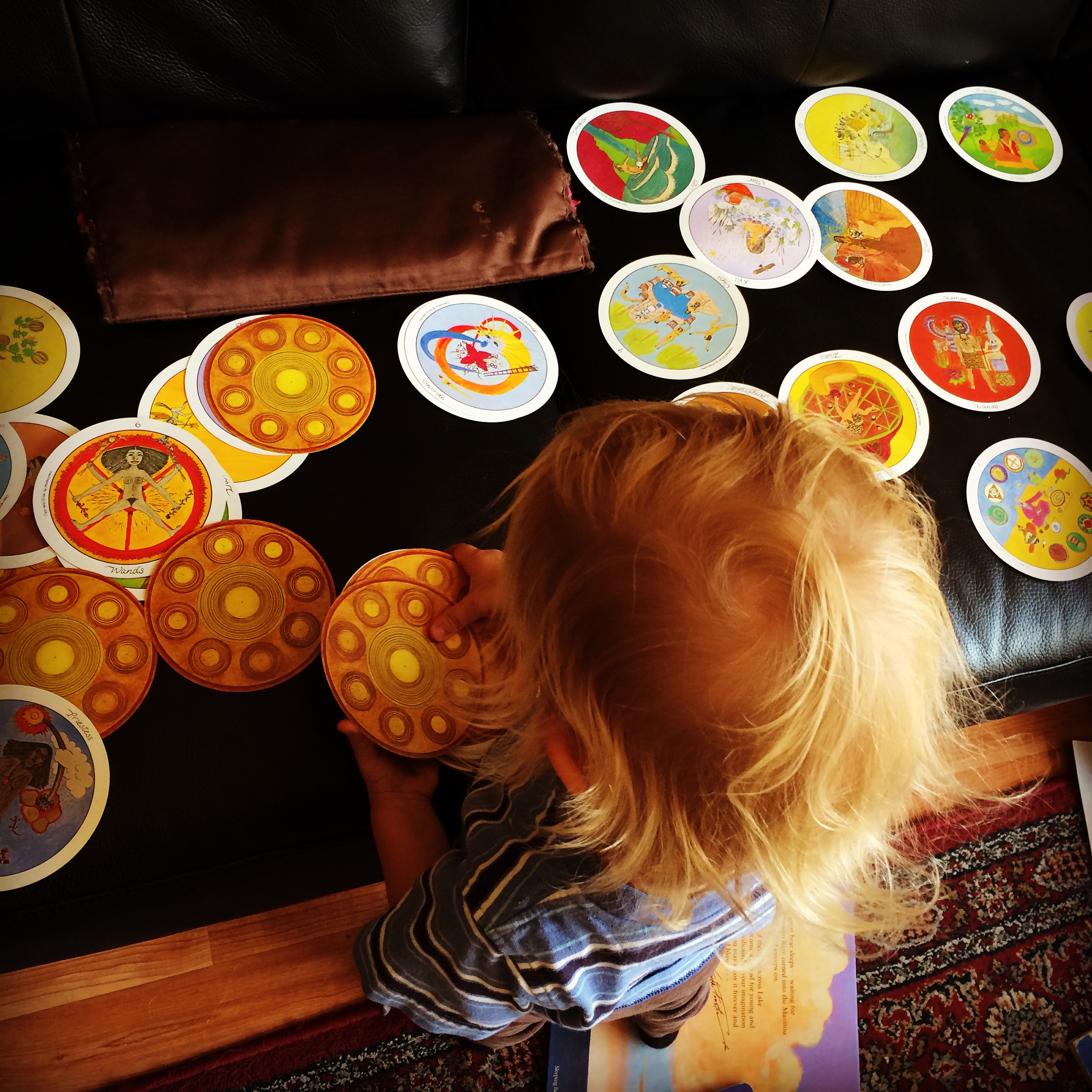 This article was originally published in Mutha Magazine on August 16, 2015.

Before we even started trying to get pregnant, my partner and I took her aluminum motorboat out to an Elk Island in the Willamette River to have a little ceremony. Our intention was to ask the help of our respective ancestors in bringing the spirit of our child into the world. Since my partner wouldn’t be contributing genetically to the child, we wanted a way to include her lineage in the making of our baby.

I’m not gonna lie, it was awkward. We’d never done magic together, she and I, mainly because she considers herself an atheist. I also worried we’d be spotted by some errant salmon fisherman. We called in the directions, and nervously asked our ancestors to find a spirit to come and be our child. All told, it wasn’t completely without magic. Just as we finished, we looked up to find that we were standing less than 5 feet from a very freaked out mama goose sitting on her nest. A good omen. I gathered a handful of stray down that must have blown from the nest to a spot near my feet.

After the 3rd month of inseminations, I had a dream right exactly around the time the zygote would be implanting itself in my uterus. In the dream a friend was telling me about a spell where you have to cast an iron circle in order to bring your child through safely. My sweetie and I were salmon fishing in the wilds of British Columbia at the time, so I did my best the next day to imagine an iron circle surrounding me and the spirit of my babe. Everywhere I looked that day I found heart-shaped rocks scattered among the river rock.

I miscarried at 5 weeks. It was just the day after getting a very weak positive on the home pregnancy test.

Although this is perfectly normal, and I had no real cause yet to worry about my ability to carry or my ability to get pregnant, I was devastated. Wailing my sadness one night among a group of my witch-peers, a mentor of mine interpreted my dream for me, and gave me a spell.

“You have to physically cast the circle around him,” she said. “Find a doll or something to represent him and draw the circle. Cast it in blood, in breath, in fire and in salt.”

The next month found me painting a circle out of my menstrual blood on a large flat rock I placed on my altar. I’m not sure how familiar you are with witchcraft, dear reader, so the very fact that I identify as a witch might make you think that I do this thing all the time. But honestly, this spell felt like it was too much. I found myself simultaneously wondering if I had tapped into some ancient primal mother magic, or if I had finally lost my mind in my desire for a baby. When had I crossed the threshold into being perfectly willing to finger-paint with my own menses? But, I figured if I couldn’t handle a little menstrual blood, I probably shouldn’t be a mother.

After the very next insemination I knew I was pregnant almost immediately.

Wait….Let me back up. Because don’t you kind of hate women who say that? I knew. And, then I didn’t know. I felt something. But then I had felt little somethings every single attempt we had made. So did I believe it? No fucking way. But I felt something. It was kind of like that feeling when your stomach drops on a roller coaster, except it was happening all the time, just a subtle upward movement at the pit of my belly.

When the pregnancy test confirmed positive, I still worried. Worried constantly I would miscarry again. In between the worry I found time to rest in trust, or maybe it was just the pregnancy hormones.

My son was born at home. In the days before his birth I kept adding to his altar. I placed an image of the Black Madonna on it. I made a birth candle, anointing it with oil and filling it with the intention of opening and protection. When labor started, I lit my candle.

I had asked a friend, and fellow witch, to priestess my birth: tending the gate between life and death as it opened to let my child though. I had taken my hypno-birthing class, and like the Aries that I am, I went into labor with the smug confidence of someone who has no fucking clue what they are doing.

It was a long labor, it started on Sunday and my son was born late Tuesday night. I cussed and swore, and cried through my labor, even as I breathed and did my best to hypo-birth. At one point my friend came in to the room where I was laboring to give me some information about my ancestors that they had channeled and I remember thinking “I don’t even understand what you are fucking saying to me, I can’t do anything other than this right now.”

It was a magical birth, but not in the way I had imagined. Whatever magic there was existed in the brute strength of my body, and the reserve I didn’t know I possessed. I worked harder physically than I ever had before in my life and then I worked a little harder. I have a friend who is named after a vision her parents had when she was being born. There were no visions in my birth, I didn’t feel close to anyone. In fact I had never felt so alone in my life, even with the amazing help of my partner and our sisters who were there. It got real the moment I realized no one could do this job but me.

And then he was there. And I recognized my son. I knew him from somewhere. I want to make up some kind of story about him and I in a past life, but honestly maybe it is just because he looks like me.

After 3 months of incredibly blissful but exhausting parenting we held a blessing ceremony. We gave him the blessing of the four elements: earth, air, fire, and water–his birthright. We took a piece of his placenta, plus the goose down and other bits of things I had put on my altar, and buried them in the back yard. I placed the stone with my blood on it face down in the dirt to let the spell of protection root into the earth.

The fourth trimester was over, he was now held by the earth, and his own spirit guides. It was no longer my job to stand at the birth gate and keep him from slipping back to the other side. Not that I could have, if it was meant to be. But still, I had been holding that weight, and now it was time to let it go.

My job in getting him here was done. Now it was my privilege to parent him for as long as I as allowed.

In my tradition we have a prayer that goes “I would know myself in all my parts.” I hope that my son will grow up knowing that I tried to honor him in his full humanity. I hope that he will grow up knowing his connection to the earth, that I might be able to show him a way of being spiritual that is better than the Church-on-Christmas-and-Easter that my parents gave me.

Then there are times when I’m just a stressed out mom who checks Facebook too much and serves French fries with ranch dressing for dinner because I’m too tired to cook anything.

In the perfect idealism of a person who has only parented for 2 years, I have set aside ritual objects for him. A chalice, a blade, a wand and a pentacle, representing the four elements, thinking to give them to him on his 13th birthday, along with the opportunity to begin learning magic. Will I be met with rolled eyes? Will the fact that mom is into magic make it the least-cool thing on the planet? Even if, will some of it sink in anyway, and regardless of how he labels it, will he grow to know he is powerful and to love himself? I hope so.

I have fantasies of us observing the traditional Sabbats together. Learning the meaning of each ancient holiday: making corn dollies on Lammas, and plantings seeds on Ostara. But so far each time a holiday rolls around I’m too tired, and he is still too young. The irony of being a parent is not lost on me: I feel as if I am undertaking the greatest magical working of my life, but it has left me with almost zero time to devote to my own spiritual practice.

All parents want better for their children than they had. We want to raise our kids equipped to deal with the problems we are leaving them on this earth. This is my attempt to do better.

I think of all that my spirituality holds for me: a way to heal the wounds of the patriarchy, a way to connect to the earth, a way to claim my power, and a way to maintain hope in a sometimes hopeless world. I want to raise him with this knowledge, with this perspective.

But even if we succeed in making things better for our kids, we don’t get to choose their own unique struggles. We have to let them struggle anyway. If I do my job right, he will never know the importance of what I chose to try and make better for him. If I do my job right it will be taken for granted, and he’ll find some new level of better-ness to try and bring his kids, if he has them.

But this is all I know. So this is what I do.